Mobile apps have become an integral part of the shopping experience. But while many retailers would probably prefer that users download their proprietary apps and buy directly from them, this holiday season, quite simply it is not what happened. As the holiday shopping season heated up, we took a quick look at the mobile retail landscape.

Why Are Many Retailer Specific Apps Struggling?

Mobile retail commerce revenue has reached $156.2 billion in 2017, according to statistics aggregator Statista. But much of that revenue is still being driven through mobile sites instead of mobile apps, as well as online superstores such as Amazon, Target, and Walmart, rather than specific retailer-branded mobile apps. It’s a problem that has plagued retailers since the beginning of mCommerce. So why are mobile apps still lagging behind? There are a few factors involved:

What Apps Are Shoppers Likely to Use This Holiday Season?

While the retailer specific mobile app landscape is still figuring itself out, there are some signs of hope for the retail app sector. Some of the most popular shopping apps in the U.S. right now (aside from mega-retailer apps like Amazon and Walmart) are third-party coupon and bargain hunting apps, rather than proprietary retailer-specific apps. Here are a some of the apps people might be using this holiday season: 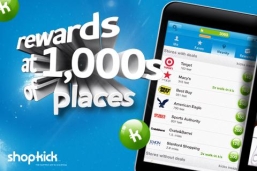 With around 23 million monthly active users and counting, Shopkick is quickly becoming a force in the mobile retail space. Using an in-app points-reward currency, Shopkick incentivizes user engagement by offering points (known as “kicks”) when users perform certain behaviors, such as visiting select brick-and-mortar shops, scanning products, visiting online stores, and purchasing products either in person or online. Your “kicks” can then be redeemed for gift cards or products from stores like Target, Walmart, Amazon, Sephora, Starbucks, and more. According to Tech Crunch, Shopkick has already driven over 200 million store visits, over 270 million in-store product scans, and over $2.5 billion in total sales from brand and retail partners.

Billing itself as an online discount mall, the Wish app has exploded recently, with more than 13 million monthly active users and climbing. By shipping directly to consumers from oversees manufacturers, wish offers cut-rate prices on a wealth of brand name consumer goods. According to Forbes Wish’s valuation has more than doubled in the past six months, making it more valuable than Sears, Macy’s And JC Penney combined.

Another bargain hunting app that’s been climbing the charts this year is Flipp. This app allows deal-seekers to forgo the physical act of coupon clipping by aggregating all the deals, coupons and sales into one easy to use app. The app also includes a “smart” shopping list feature, which allows users to select products from over 1,000 popular retailers and then automatically receive updates on the best local deals, based on what’s on their list.

What Does This Mean for Retailers?

With the explosion of these third-party apps comes both good and bad news for retailers. Since the majority of these apps are focused on driving traffic to major retailers, including to their brick-and-mortar locations, many retailers have seen an uptick in business as a result. However, what they lose in the exchange is direct customer engagement. However, there might be a way around this issue as well. For instance, Shopkick recently introduced a feature that allows users to earn extra “kicks” in exchange for watching branded video content within the app.

Simply put, the mobile retail landscape is still developing, and for a while to come it might look like the wild west. But with the rapidly swelling numbers behind these retail apps, they are making themselves hard to ignore.

Don’t have your own app? Make it a goal for Q1, and begin building customers loyalty and sales througout the year. Apps don’t just magically make sales. It’s a part of your complete digital marketing strategy we help you build.

Ask us if a mobile app is right for your retail business! Don’t just do it without direction. Get guidance and have a marketing plan, and it will be successful.