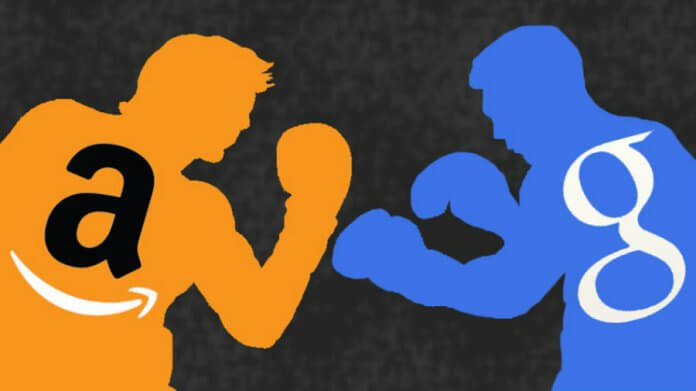 Can Google Express Recoup Some of Amazon’s Market Share?

Amazon is currently the fourth largest company in the world, valued at 427 billion dollars. The ecommerce giant has almost single-handedly led the online shopping revolution, bringing millions of products to consumers, sometimes in less than 24 hours. It’s easy to see why Amazon has dominated the online shopping market. With so many resources at its disposal, the company has been able to set up shipping centers all over the country, keeping products as close to consumers as possible, so they can offer impossibly fast shipping and attract more subscribers to their Amazon Prime service with free two-day shipping.

But another goliath of the internet, Google, is also looking to cash in on the online shopping craze. The company is primarily known for its search engine, but it is refining its search practices to beat Amazon at its own game.

The Rise of Google Shopping Ads

Google has recently been putting more emphasis on its shopping ads, usually image-based results that appear at the top of the user’s search query. Google Shopping ads now account for 76.4% of all retail search ad spending in the U.S. These ads are appealing to both retail companies and consumers. When a person searches for a generic product like “skinny jeans”, seeing product images from name brand stores can help refine their search. Retail companies can also use these ads to position themselves as an alternative to Amazon. Now that Google has become the go-to for all things search, Amazon might appear in some of the search results for certain products, but these Google Shopping ads usually get a higher spot on the page.

How Google Express Is Taking on Amazon

Google is in the middle of launching a new service known as Google Express. The basic idea behind this service is that a consumer can place an order from one of their favorite retailers, like Walmart or Target, and, thanks to Google’s robust infrastructure, the consumer can get their package in less than 24 hours. This is a direct threat to Amazon’s impeccably fast shipping services. Now, that consumers have two options when it comes to next-day delivery, only time will tell who will succeed.

Google Express is being advertised as “all your favorite stores in one location.” Take a look at this ad titled, “Need Anything from the Store?”

Google is working with some of the largest online retailers in the market like Walmart and Target by listing their products on Google Express. As more stores join the bandwagon, we may see Amazon lose its iron grip on the ecommerce market.

What the Future Holds

Amazon continues to be top of mind for consumers looking to making a purchase online. In fact, Amazon was responsible for more than 50% of ecommerce sales growth in 2016. In order to succeed, consumers will need to start thinking of Google Express in the same way.

We’re likely to see this Google Express service struggle a bit in the coming months as it continues to find its footing. In the meantime, expect more attention to be paid to Google Shopping ads. The market is being flooded with retailers looking to get more clicks, and this is one of the only ways ecommerce companies can get an edge over Amazon.

Despite what some analysts have been projecting for years, in-store shopping appears to be far from extinct. About 92% of all retail purchases happen in store, and studies show that Generation Z prefers to do its shopping in-store. Of course, that might change as more of these young kids get jobs and have less time for in-person shopping. But the brick-and-mortar store isn’t going anywhere any time soon. Expect to see more boutique-style stores opening up in urban areas, creating more of an experience than a traditional retail environment. If this trend holds, we might even see Amazon building its own retail centers all over the country.